Well today i put out answer and redeem 2. I made it tricky. And i got answers i thought i would get.

Here are answer and redeem 2's questions:
1. Who works at the bazzar? Not that hard. Elik Silverfist﻿
2. Who is the first boss you fight? Easy Peasy. Rattlebones! No.
You see the 2nd question is where it began. Rattlebones is ranked ELITE. Not boss.
BLAH BLAH BLAH SKIP THIS PART JUST A CONFUSING COMMENT FIGHT!!!!!
DON'T SAY I DIDN'T WARN YOU! 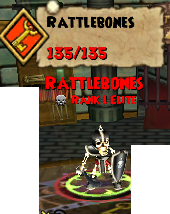 (hence the pic)
I was going to have the answer be lady black hope. But........ We have a backdraw. I never said first boss from the story line. So the fairy queen from unicorn way comes into the picture. Now the first two comments i got weren't the answer i said were correct. So i declined both. One guy ( i'm NOT trying to start a fight ) says that the fairy queen should be counted as well. I don't like argueing and he has a point. So i say here take the code *gives code* Now the other guy ( again i'm Not trying to start a fight) says hey rattle bones is a boss * inserts long arguement*. I deleted these comments. Now my question was very unfair so i've made more. And that is why we have answer and redeem 2 and 3 on the same day

Questions:
1. What type of ninja pig do you fight first ( Main Storyline)? ex: *fill in a name* defouler. bandit, courier.
2. The Emperor of Mooshu's Guard's name is what?
Allright this is a bit confusing.... but you should be able to handle it.
Happy pet collecting,
The Cool Thuergist
Posted by The Deadly theurgist at 5:03 PM